Following a rocky start and a messy midsection, Disney+’s fantasy romance Kiss Sixth Sense finally showed some signs of life during its final episodes, but even for those who stuck around it was a case of too little, too late.

Sticking to the opposites-attract workplace romance formula, the show spent far too long on the “opposites” side of the equation, but once we arrived at the attraction phase, it mustered a few sorely needed emotional beats.

Hong Ye-sul (Seo Ji-hye) and Cha Min-hoo (Yoon Kye-sang) started off with an antagonistic relationship at work, but rather than being cheeky and combustible, it felt flat and off key.

They eventually became a reluctant couple, after they both acknowledged the inevitability of Hong’s vision of them sharing a passionate night together, but this scarcely improves the dynamic between them, which shifts from contentious to confounding.

The pair eventually fall in love and things finally improve, or at least edge into a reassuringly familiar direction. At this point, the concept gives rise to an interesting question: Did their sexual tryst only happen because they got to know each other while they were each dreading the moment to come?

They even start to use their supernatural gifts, which had up until now been only occasionally, and clumsily, inserted into the story. This mostly takes the form of Hong whispering in the office, where only Cha can hear her, and a complex array of secret hand signals to steal away for private moments in sheltered locations.

Fantasy is a prominent fixture in Korean films and dramas. It’s a tool that opens the doors to a variety of new scenarios, allowing writers to spice up common story tropes. It’s used across all genres, but is especially common in romance. 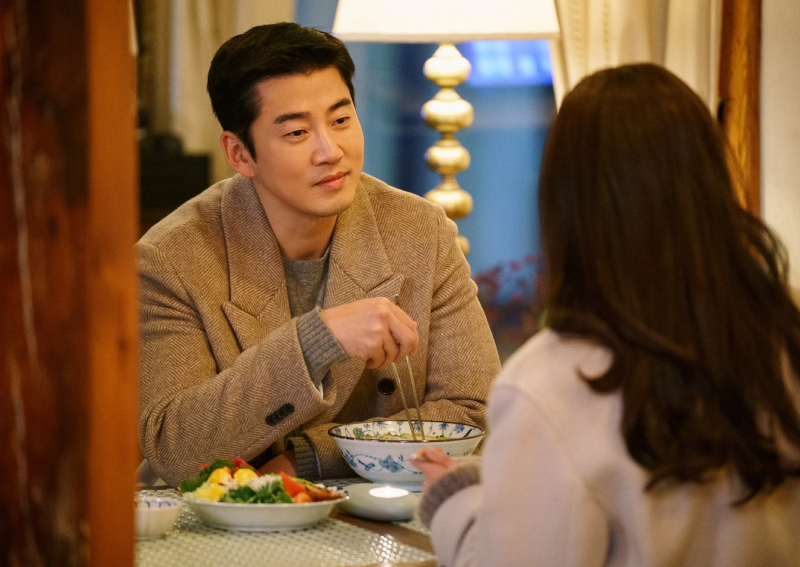 There are several established fantasy templates — timeslip narratives, tale of gumiho (a magical nine-tailed fox commonly found in Korean legends), etc. — but when writers wander beyond those entrenched formats, rules start to get a little spotty.

Kiss Sixth Sense gave us a pair of protagonists with starkly different but vaguely complementary fantastical abilities. Hong’s ability was simple enough: By pressing her lips to any part of a person’s body she could see a glimpse of their future.

In the case of Cha, it’s more of a struggle to get a handle on his assortment of abilities. He has extrasensory perception, such as heightened hearing and sight, but he also has vague premonitory abilities, which are never satisfactorily explained. 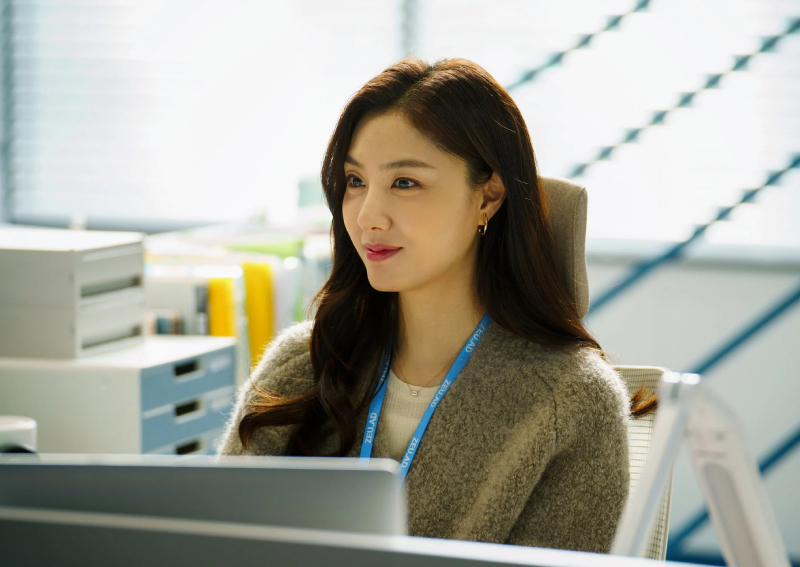 Speaking of explanations, when the show reaches its climax we are dutifully filled in on the reason for our star-crossed lovers’ supernatural powers.

Coinciding with a shared traumatic event in their childhood was a so-called super blood moon, a rare phenomenon that takes place when a total eclipse (blood moon) occurs as the moon reaches its perigee (the point when it’s closest to earth).

According to one character on the show, this moon may have initially given them their powers because they were trying to protect one another.

During the show’s climax, a mirrored set of circumstances — Cha saving Hong from a lake and trying to resuscitate her with mouth-to-mouth resuscitation under the blood moon — causes those abilities to disappear.

If Kiss Sixth Sense was a little hokey with its fantasy tropes, its main relationship surely stuck to dyed-in-the-wool methods, which is to say that it was disappointingly patriarchal.

Cha’s transition from gruff and arrogant boss to kind and sheepish boyfriend succeeds against the odds. What is a shame is that their relationship is propped up by several instances of the hero saving the damsel in distress.

Unfortunately, Kiss Sixth Sense is also notable for another sad fact: It included the final role of actress Kim Mi-soo , a rising actress who took her own life earlier this year. Previously seen in The School Nurse Files and Snowdrop, Kim died at a late stage in the show’s production. 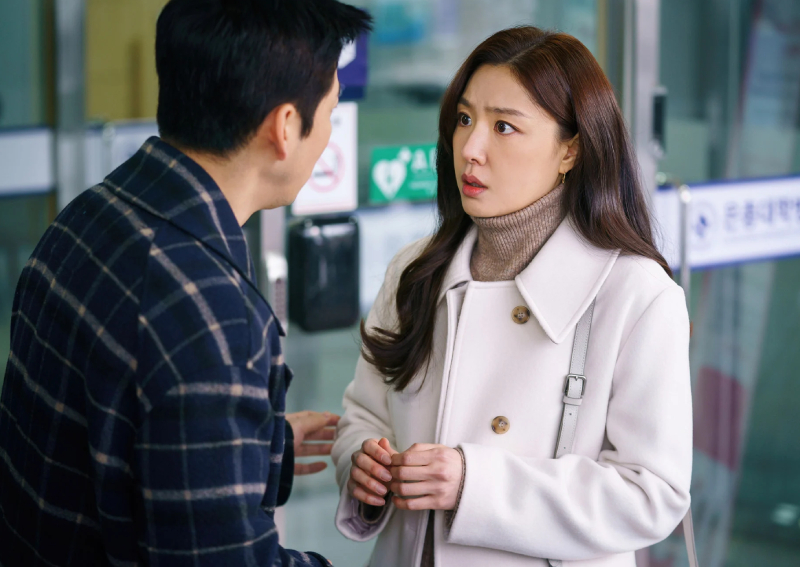 She plays Hong’s colleague Kim Min-hee and, while a few plot strands involved her, she appears only sporadically throughout the show, particularly in the later episodes. She’s entirely absent from the finale. The production dedicated its first episode to her.

Outside the office, the show gave us a pair of secondary romances. Superstar Oh Ji-young (Lee Joo-yeon) eventually shifts her focus from Cha to director Lee Pil-yo (Kim Ji-suk). He doesn’t get the clear hints she drops and that everyone else sees until the very end.

This courtship moves along familiar lines but has its moments, such as when Ji-young finally gives up and confesses to him during a press conference. 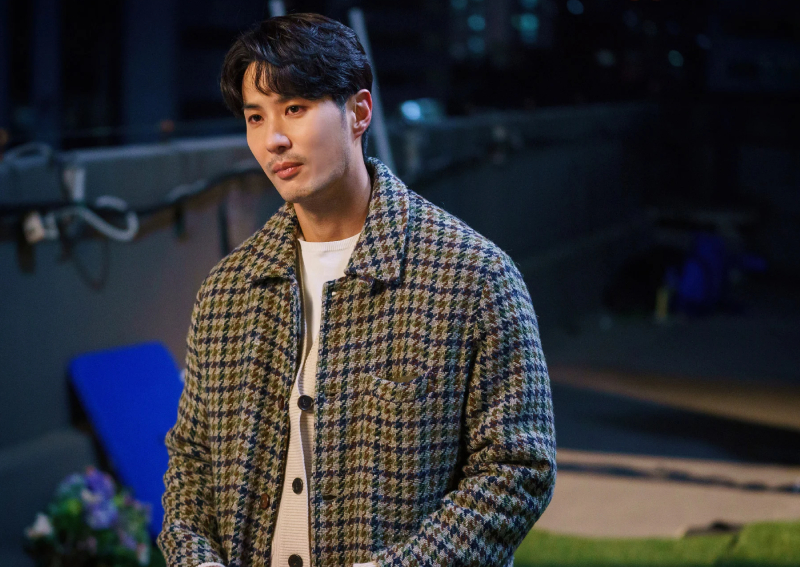 The other romantic coupling concerned Hong’s cousin and roommate Ban Ho-woo (Kim Ga-eun) and Cha’s doctor friend Oh Seung-taek (Tae In-ho), who engage in a bizarre and intense one-week cutesy romance, break up, and meet again when she becomes one of his new residents.

After a baffling start, the relationship is largely relegated to the sidelines, where it limps on in a smattering of scattered scenes before being forgotten completely.

End notes are awfully important for dramas, but Kiss Sixth Sense would have needed something truly special to make up for what came before.

This article was first published in South China Morning Post.

Southwick twins graduate from HCC on Saturday as valedictorians

How women break the India-Pakistan wall over WhatsApp, biryani & banoffee pie in Dubai