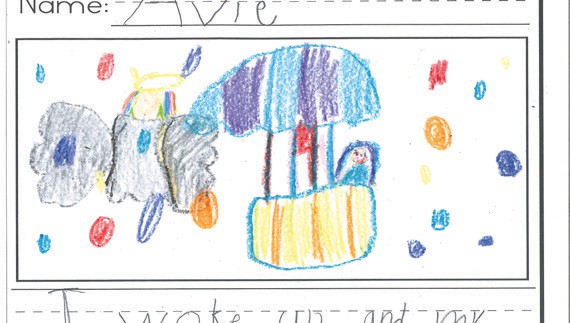 Becki Carey’s 2nd-grade class at Franklin Elementary in Eveleth spent some time this spring practicing their creative writing. We are pleased to share the imaginative stories these budding writers came up with—from showers of jelly beans to unicorns that somehow stumbled into a deep hole.

Mrs. Carey said, “In second grade, we learn about all types of writing. In April, my class worked on some creative writing. It was right before our spring break so there are many stories that include jellybeans! It is so exciting to watch students learn and grow as writers from the start of the school year until the end!”

Read on for a sampling of 8-year-old creativity, spelling, grammar, and all. —Janna Goerdt, Staff Writer

The Bunny who Liked Jellybeans. I was swinging on a sunny day and eating jellybeans. Then a bunny came up to me and started eating the jellybeans. So I went into the house and asked my mom if I could have the bunny and she said yes! It’s favorite jellybean color was yellow. I named it Beans. We ate a lot of candy and we had a great life together! Taryn

Once upon a time there was a snake I saw it growed legs and toward me. bit me on the legs Grama and Grampa snake and Mom and Dad snakes grew legs and bit me on my legs and arms it poisoned me I grabed astick and a lunick Parker

I heard a sound, it was hard. I thought it was an earthquake but it wasn’t. It was raining jellybeans! Then I ran outside. I picked them up. Then I woke up from my strange dream Emmett

My mom Turned Into a Chickadee. I woke up and something ended wrong. My MOM was A Chickadee!! It started talking to me! I had no idea it was my mom! I could not believe it the day mom turned back to normal. Aliya 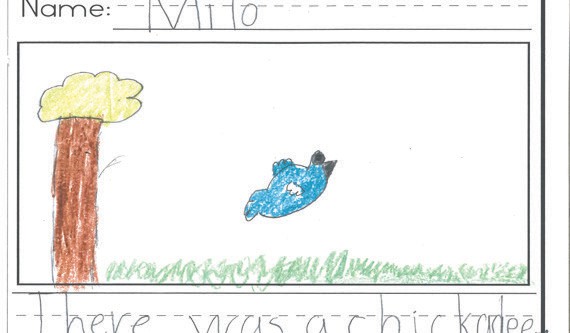 It was a rainy d and a bunny came along. The bunny got mad when he saw other bunnies in a cage. The bunny punter us out on the butt. The bunny blew up a house! Boom! We went to a new house and we were safe and sound at the new house. Harper

The Dog Who Turned Into a Wolf. Once upon a time there was a dog that was playing in the woods. When he was playing he looked around and saw a cave. He went into it and the next thing he knew he he was a wolf! When he was a wolf he found a pack to join and lived happily ever after. Tim

A chocolate bunny that came to life! I was eating candy on a bench. Then I felt my basket move…and a chocolate bunn popped out! It said “don’t eat me! It started to run. I started to chase it…then my dog saw it and ate it up! Serenity

Boing! Boing! I woke up and I turned. around I saw my Easter basket. I waw a to big, big, big, bunny but I truied to wake up but it won’t work. Then he wen’t back to Easterland. I went with him to Easterland. It was so fun. There but I had to go back home. I wen’t home and I woke every body up and we opened the Easter baskets. Leyland

There was a chickadee. He really wanted to be a fire fighter. So on June 2, he went on a hunt He found a walnut, redcloth, yellow cloth and two little boots. He spent a month getting ready. When he came outside. he was a fire fighter Milo

I have a basket full of candy. I reached in for my chocolate bunny. It talked to me! It ran away. I started looking for it. My dog ran in and smelt it I saw it on the table. I grabbed it and my brother said “Eat it!,” so I did! And then I woke up from my silly dream. The End! Elizabeth

I heard someone at the door. I open the door and I saw the Easter Bunny. He gave me candy. Then he was a Lion Snake. I ran a way from him. I hid some where. He cound not find me. He got mad he said come out where ever you are. Then he was gone. Josie

There was a baby T.rex living his best life. he strong and he was growing but one day he was so big his mother said he had to go in the wild and make a home. The next day he gew into a full grown T.rex. He saw a Giga watching him. They fought and the T.rex won. But got injured in the fight. The next morning he got a Steagsoros. He ate it then a meteor hit Earth. Then a bunch more hit the Earth. H hide, he froze, a he woke woke up 60 million years later. H hunted deer to live. The end. Easton

One day I was eating a gummy bear and then. One started to talk to me. He told me that he got seprated from his famly. his family was put in a different bag. He said he really misses his. He asked me if I could find his famly. So I baught three more packs. I opend the last pack. I could not belieue it! It was his famly! have you ever had a gummy bear talk to you? Holly

I was sleeping and it was Easter. Then I woke, up because I heard a big Boom!! I ran to the kitchen and I saw a chocolate bunny who came to life! It had pink eyes, and was dancing on the counter. I started screaming and my mom and dad woke up. Then the bunny went away and they said I was dreaming! I said I wasn’t then I went back to sleep. The end. Bexley

I woke up and jelly beans were rain ing it was not a dream I did not believe it it was so cool and it wa so crazy I couldn’t believe my eyes. It was so cool it was raining jelly beans. Alex

I heard a sound outside I wolked out side and I sow jellybeans on the grass Then I saw my dad on the roof he was the one spilling the jellybeans I woke up from my dream. Grayson

I woke up and my dad said “hey go on a hot air balloon ried. ok?” So I go on a hot air balloon and it went high! I see the most amazing thing ever. It was raining jellybeans! So I went home and I said “dad come with me.” Dad said, “ok, ok, ok!” Dad can you see it? It is so beautiful! We ate so much! We didn’t live with anyone so we decided to move. Avie

Have you ever been pushed into a hole? Well I am going to tell you the time I got pushed into a hole. Let me introduce myself, I am a Unicorn. I was just walking then the town bully pushed me in a whole he made. I screamd for help! I probably in there for 30 minutes. But finally help was here. A bunch of little leprechauns. They said “what are you doing in that hole?” I said “a bully pushed me in.” Then they said, “do you need help getting out of there?” I said “yes!” Then they went home to get a ladder. A few minutes later I was out of the hole. I was so thankful. I said “how can I repay you?” They said “no problem. THE END Britt

There’s a bad soand. Boom! It’s a Bunny Rex! First, it takes down buildings. Next, it fights with it’s laser eyes! Next, I try to hop onto the Bunny-Rex I start to control it. Next, it makes Werd noises! Next, it turns into a bunny. Lastly, I wake up. Holden

Lawrenceburg’s Mason Parris gets ‘Next in Line’ deal with WWE

Travel and Tourism Essay, What It Is and How to Write It