When writing a novel, the opening lines, the opening paragraphs, the opening chapters are particularly vital to get right because the spell over the reader hasn’t taken hold yet. The reader still exists in their world, not yours. You must entice and enthrall. Your story has to matter more than their phone, tv or getting a snack. If you are a writer from an under-represented background, your task is even harder, because, consciously and unconsciously, your readers will expect you to confirm their biases. As an author writing about disability, I wanted my novel, The Coward, to undercut the triumph-over-adversity trope and the inspiration porn clichés that publishing expects from stories about disability. In early drafts of my novel, I struggled with how much to spell out to the average reader unfamiliar with the experiences of a wheelchair user.

It’s easy to pretend as a published author that my novel emerged from my forehead fully formed, dressed for battle and without typos. I wish. The first step in writing a novel is to accept that you have to get it wrong before you get it right. Since I have unique access to the Jarred McGinnis archives currently held by the august institution of a zip file on my computer, I’m going to show you early drafts of my novel The Coward as I struggled toward getting it right. I’m going to focus on the opening because there is no room for mistakes here. Here’s how the old draft begins.

When I woke up in the hospital, they told me my girlfriend had been killed. She wasn’t my girlfriend, but I didn’t correct them.

I’m still happy with these sentences. This opening raises an interesting question. It’s short sharp shock. The Coward is not a light read, there’s humor but it’s a book that explores difficult themes so I wanted to let the reader know what they are in for from the beginning. The first sentence is okay, but it’s the second sentence that does the heavy lifting by juxtaposing the mundane with the extreme. It’s telling you, in two short and simple sentences, that there is way more going on than finding out why he’s in the hospital and why his “girlfriend” is dead. It comes from a love of concision I learned from great short stories. These opening lines survive in the final version. Don’t fix what ain’t broke.

The next paragraph is where the draft starts to falter.

The first weeks are hazed in narcotic fog: the operating room with masked faces leaning over me, the days and nights beneath breathing ceiling tiles, poked and prodded, the endless parade of momma ducks in lab coats followed by their fleet of doctorlings and a scrubs-clad stranger talking to me about a wheelchair and me saying I wanted to use crutches, still not understanding. Day by day, the truth would drip through the IV in my hand with the saline and antibiotics.

A version of this remains in the final draft, but this litany of short phrases doesn’t do enough to convey what it is like to emerge from unconsciousness after a traumatic car accident. The neologism of “doctorlings” starts to give you a bit of the main character’s voice, but it wasn’t enough for an opening. Instead of the single throwaway phrase “breathing ceiling tiles,” I departed from my actual experience of post-operative delirium to develop one of the other themes of the book, which is about how we write and rewrite the stories we tell ourselves about our lives. Something true of us all, regardless of disability. The narrative, for me, was more important than the factual representation of disability.

The following paragraph is even worse.

After I was stabilized, after they sewed and stapled the holes and gashes, after a dose of sepsis finally responded to treatment, after the arm cast was sawed off, after the metal work in my spine was fixed enough to no longer need the back brace, after my pain management plan meant no more of the good stuff, after three months, they told me I was discharged. Anyone who didn’t know my insurance situation talked about five to six months.

I just keep going. Jeez Louise. However, this is almost inevitable in early drafts. These information dumps and summaries is me talking to myself to understand the elements of the story I would eventually write. Sure, this draft has important plot information such as the narrator getting chucked out of the hospital because of a lack of health insurance. This is a real and brutal plot point for the disabled in America, which I needed to include—just not in this way. I’m also describing how physically damaged he is, but lists are easy to ignore. In the published version, I hold back on this and focus on the back brace and only as a prop in a scene between to characters. An able-bodied reader will know a back brace is something serious. Any SCI survivor will vividly remember that uncomfortable, sweaty, stinking thing you had to wear for months on end. I didn’t want to focus too much on the brace because ultimately, I’m not telling a story about disability. I’m telling the story of a man who happens to be disabled.

In the published version, the line I kept relatively unscathed was:

A scrubs-clad stranger told me I wouldn’t walk again. She said something about a wheelchair and I said I preferred crutches, still not understanding.

These lines efficiently convey the dissonance between an able-bodied mindset and a newly disabled body—a complexity that is missing from disabled characters in fiction that I was determined to get right.

The first page of the published version still includes a litany of things but I limited them to sensory experiences:

I think this is more compelling than describing abstract processes (e.g., sepsis responding to treatment), but I went back and forth about how much enumeration is too much even up to the copy-editing stage. My hope was that there’s enough variety in imagery, voice and interesting use of language that I keep the reader interested long enough to get to an actual scene with the orderly and the brace on page three.

The first step in writing a novel is to accept that you have to get it wrong before you get it right.

The next paragraph pains me to show, because it is so, so bad. But I can’t tell you to be okay with your mistakes, if I can’t be.

Now I have to phone Jack. Jack is my father and I hate him. Actually, I don’t know if I hate him. I haven’t seen him in a decade since I ran away as a sixteen-year-old full of a teenager’s sense of injustice. Most likely I only remember hating him. Ten years is long enough to make a stranger of anyone, even your father. I have to phone this stranger with the same last name, because there is no one else to call. Not a single person on this planet, including myself, is willing to put up with me and this wheelchair.

What’s the first thing you say to the old man who was the father you antagonized and defied until he ended up throwing you around your childhood home. The man you haven’t said a word to since running away. What’s the opening line that precedes – I’m a wheelchair-bound paraplegic. Can I come stay with you? Oh, and I’m responsible for a woman’s death.

This is a summary of what I eventually actually wrote over several chapters. This is writing that does not make the reader live in this characters’ skin—it’s the definition of telling, not showing. But, again, early drafts are where you figure out what the problems are that so you can fix them.

My voluntary public humiliation is almost over. Here’s the last paragraph of the old draft.

I give him the address.

“That’s a hospital. What’s happened? Are you okay?”

“I’ve been in a car accident.”

“Can you tell me what happened?”

“Not over the phone.”

“Okay. We’ll get you home. You need me to bring you anything?”

I tried to say no but when I opened my mouth I sobbed. I cried in gratitude but self-pity too. I mourned my life, as shitty as it was, because it was over. I cried afraid of what this new life meant.

“It’s going to take a few hours to get up there.”

At least the characters are doing something now. My goal here was to introduce the other main character, Jack, the narrator’s father. I wanted to show Jack as willing to drop everything and do what fathers do even though he hasn’t spoken to his son in ten years. I want the reader to wonder why the narrator doesn’t like Jack even though Jack seems okay. But those questions would have arisen in the reader’s mind even if I didn’t spell it all out in the previous terrible paragraphs. I do a better job of maintaining the ambiguity in the final draft. I let the reader know something is off but I don’t spell it out so awkwardly. I leave it hanging and by doing so I hope to intrigue the reader to immediately start reading chapter two. I’m casting my spell. A few more good chapters and you have them in your world, not theirs. Powerful Juju, this writing business is.

In other drafts, I tried doing this opening chapter from Jack’s perspective. The same questions were raised about the accident, the girlfriend and the main character. It worked okay but it couldn’t be sustained and I needed to stay inside the main character’s head. He is the “ingénue,” the Alice, that takes the reader through the Wonderland of disability. I need his voice and interiority so it will be the reader’s.

Once I understood that writing from a newly disabled person’s perspective was a powerful technique to get the able-bodied reader to understand his experience. His mind-set is theirs. His observations would be theirs. I’ve been in a wheelchair now for over two decades. I don’t think about how I move around in the world any more than the able-bodied are chanting ‘left foot, right foot, left foot’ to themselves. I had to do my research and use my imagination like any other fiction writer to remember what this character would be noticing.

The first chapters of the published version are full of his observations in this new normality.

The orderly adjusted my legs one by one. My damaged nerves reported an ambiguous pull at my hips, but when he touched my feet it felt like they were dipped in scalding water. The doctors and physical therapists assured me this was normal.

Later chapters pull back from the physicality as it becomes clear that the wheelchair and disability are not what has traumatized this character. If I don’t mention his wheelchair, the reader doesn’t think about it, which is mirroring the character’s experience as he gets used to his disability and was true to my own experience.

It took draft after draft to get right. That’s okay. Powerful juju shouldn’t happen easily. Especially if you are telling a story that hasn’t been told yet. 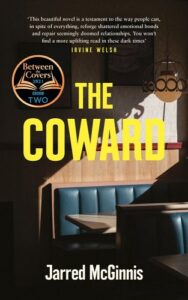 Jarred McGinnis’ The Coward is available now via Canongate.

Optronics Technologies S A : Essay Writing Service At 9 US dollars

Realtimecampaign.com Discusses Tips on How to Get into Business School

How to Sell Your Writing Skills and Make Money

I quit! The art of writing the great resignation letter |...