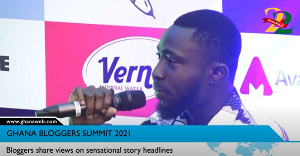 A Ghanaian blogger known in the media space as Celebrity blogger has stated that negative and fake news about key personalities attract readers and eventually result in revenue for their blogsites.

Speaking at the Bloggers Summit 2021 in Accra on Saturday, December 4, he explained why most bloggers sensationalise news stories.

“It is part of the thing. If I post something that is positive about you, no one will go to the site and read the content. It is not always that we post negative but sometimes you need to also post negatively about artistes and celebrities for people to go to your site… sometimes I see it in a way that putting negative comments about someone is great and it also fetches us a lot of money as well,” said Celebrity blogger.

Countering his claim, Kofi Cephas of ghgossips.com argued that fake news cannot sustain a website urging his colleagues to abide by the code and ethics of journalism.

Cephas said: “Fake news won’t sustain your blog, just like some years ago we had Screwlife, they had a lot of money but it wasn’t sustainable yet it was a satire blog. Even satire blogs, our culture doesn’t really permit it. It is a whole niche on its own. Fake news won’t sustain your blog but then, again, most of our readers don’t read, they rely on headlines…if after Rapperholic, I write Sarkodie is gay (happy) is it my fault that you don’t understand gay? That’s not my problem, I am not an English teacher.”

Also, Blogger and Publicist, Juliana Ntiamoah popularly known as Jullie Jay-Kanz added that “it will be very difficult to regulate blogging sites. People are creating blogs almost every day as to how to put these people in check will be very difficult. You will be accountable for whatever you put on your blog. There are laws in this country that takes care of that.”

Watch the video below:

6 common SEO mistakes B2Bs make (and how to fix them)

Top four reasons not to start an Affiliate business in Gambling